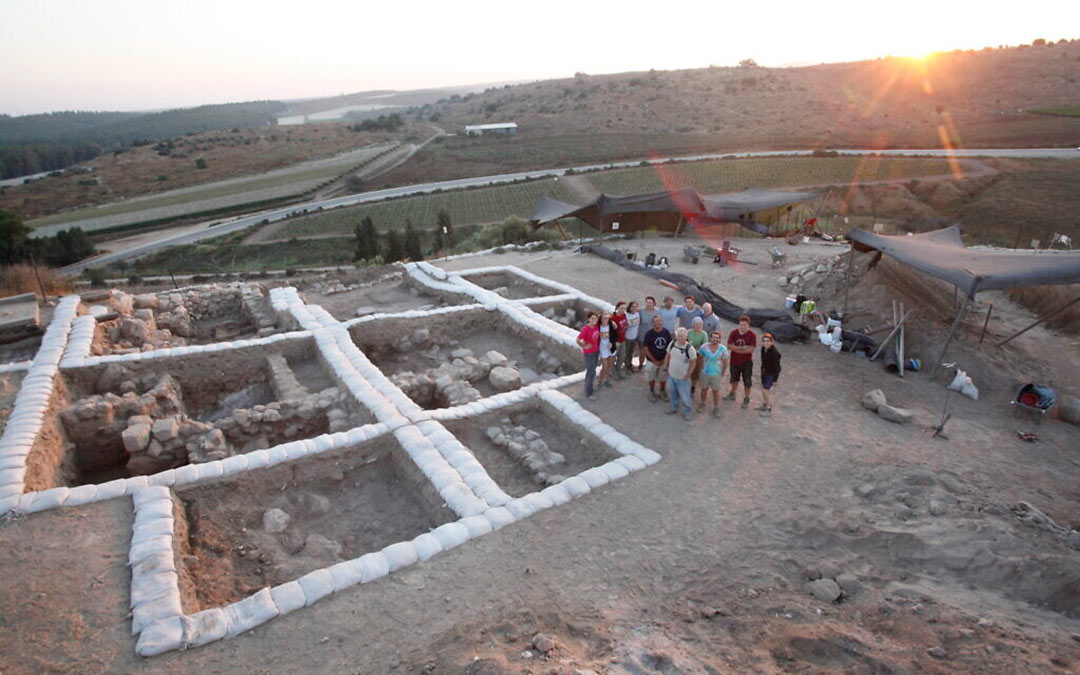 SUMMARY: A previously unknown 12th century BC Canaanite style temple has been excavated at the Lachish archaeological site. Here we consider some of the findings.

If you forsake the LORD and serve foreign gods, then he will turn and do you harm and consume you, after having done you good.” And the people said to Joshua, “No, but we will serve the LORD.” Then Joshua said to the people, “You are witnesses against yourselves that you have chosen the LORD, to serve him.” And they said, “We are witnesses.” He said, “Then put away the foreign gods that are among you, and incline your heart to the LORD, the God of Israel.” – Joshua 24:20-23 (ESV)

A previously unknown temple linked to Canaanite worship has been identified and excavated at the Tel Lachish archaeological site, located in Israel’s Shephelah region. Work on the structure that has been dated to 12th century BC occurred from 2014-2017, but the findings were not published until early this year. The report has generated a lot of interest for archaeologists and biblical studies specialists engaged in research related to the development of religion in the Levant.

In a press release, archaeologist Professor Yosef Garfinkel stated, “This excavation has been breathtaking.” The reason, in his words, is that “Only once every 30 or 40 years do we get the chance to excavate a Canaanite temple in Israel. What we found sheds new light on ancient life in the region. It would be hard to overstate the importance of these findings.”

The findings are of interest for at least two primary reasons. First, Lachish was an ancient Canaanite city that was captured by Joshua, and which later became an important city in ancient Judah. Second, the temple contained artifacts clearly linked to Canaanite worship and was apparently operative during the period of Israelite control.

Since Israelite religion was opposed to Canaanite religion, one wonders how the interplay occurred. Was this a Canaanite temple utilized by Canaanites who returned after Joshua’s conquest? Or, could Israelites have continued to operate it in a way consistent with its original purposes? An evaluation of this cultic center provides a fresh opportunity to ask questions about how such an interplay might have occurred. (See our Thinker Update on the Lachish city wall discovery and the debate over its dating.)

Temple Structure and Ritual Use

The temple structure measures approximately 19 x 16 meters and is being described as an example of the midsize category. It is comprised of 8 architectural units, which represent 7 rooms plus an entrance opening into a courtyard. The main room was a large hall possessing pillars for roof support, flanked by additional secondary rooms. On the west of the structure were two rooms; on the east was at least one main side room; and on the north was a room or niche used for ritual purposes.

Of great interest to researchers in such excavations are areas designated specifically for cultic use. In this temple, the room or niche located to the north of the main hall seemed clearly to be the primary internal area for this purpose. This was due in part to its location as well as to the close proximity of a number of cultic artifacts.

Recovered items included weapons, jewelry, beads, a cultic scepter head, a pendant of a female goddess, and two “smiting god” figurines. Additionally, a foundation deposit (a cache of ritually buried ceremonial objects) was located in the room’s wall further amplifying the likelihood of its ritual significance. Subsequently, the team designated this area the “holy of holies.”

On the south side of the temple was a typical courtyard area consistent with the layout of temples of this style. Although it was surely the site of much cultic activity, including sacrifice, few related artifacts were discovered here. The lack of findings is due to the fact that the area was significantly damaged during a later period by the construction of pits, which have left little trace of the courtyard floor.

The two “smiting gods” have generated a lot of interest for a variety of reasons. Readers of the biblical text will immediately be struck with recollection of the clear biblical prohibition against the use of such items. The ones discovered here are of a common type generally connected to temple contexts during the Late Bronze to early Iron Age periods. They are male figures in “a marching stance with right hand raised,” one of which holds a weapon attached at the head (p. 9).

The figurines depict warrior gods in a striking or “smiting” pose, hence the label. They are made of bronze and have pegs at the feet allowing them to be attached to a wooden stand. This style of idol is known to represent the Canaanite deities Baal and Resheph. In addition to these two idols, a pendant of a female deity was also discovered along with other artifacts reflecting Egyptian influence. (See more on biblical evidence for rampant idol worship in ancient israel.)

Analysis of the Research

The article presenting the findings is very well-done and presents a lot of fascinating and nuanced insights. It is especially intriguing when it makes projections about the motivations that ancient individuals may have had for their actions – a prospect that is always risky. The researchers seem to be careful and very thoughtful, though at times bold in the reconstruction of events and connected motives.

For example, the two “smiting gods” were found outside of the cult room. This simple discovery led them to suggest that the main deity connected to the site was not one of the Canaanite gods represented. Else, the logic goes, the image(s) would not have been outside of the room, but inside the room. This is a sensible, but bold suggestion in view of so many unknowns. For example, during the “crisis phase” postulated by the researchers, when on the cusp of demise the temple was used for purposes other than primarily ritualistic ones, could the idols have simply been relocated by someone?

Later, the paper describes a “lamp and bowl” deposit made after the destruction of the temple. The researchers posit that it may have been placed there by survivors of the city’s destruction, who “deliberately chose to bury the deposit in its ruins as an offering …. and may have wished to pay the temple their last respects and, in turn, mark the termination of ritual activity associated with it” (p. 23). Again, such assertions are sensible, but bold.

The researchers make several direct and indirect references to the biblical narrative. No mention is made, however, to the Bible’s record of the capture of Lachish by the Israelites. For example, the room or niche inside the temple is designated throughout the paper as the “holy of holies,” a phrase that will sound very familiar to readers of the Bible. Additionally, the explanation of the cultic activity that seems to have occurred in the temple is compared to that of Jacob at Bethel (Genesis 28:18; 35:13) and of Moses at Sinai (Exodus 24:4-8) (p. 20). But where is the reference to the Israelite capture of Lachish in Joshua 10?

The biblical perspective is that Canaanite Lachish became Israelite Lachish under Joshua’s leadership during the battle with the coalition of five kings (Joshua 10:3). This episode was connected to the alliance created between the Gibeonites and Israelites, so the political details are well attested in Scripture. But some researchers argue that it was only much later that Israel took control of Lachish and that the record of Joshua’s conquest is not historical. They do so in part because of the strong presence of Canaanite material culture in Lachish at a time when it should have been firmly under the control of Israel, according to the Bible. But is this a real factor at all?

There are two main timeframes proposed for the biblical accounts of the exodus out of Egypt and conquest of Canaan – an early date in the 15th century BC, and a late date (held by a large majority of scholars) in the 13th century BC. But for some of those who reject Joshua’s conquest of Lachish, neither is relevant. Similarly, from a biblical perspective, whether one takes an early date for the capture, or a later date, the issue is not a problem. This is because the presence of Canaanite ritual paraphernalia – even a whole worship center – is totally consistent with the biblical presentation.

Although the Torah is replete with warnings and admonitions about engaging in illicit worship, actual religious practice was consistently idolatrous. Even by the end of Joshua’s life the Israelites were still worshiping the gods of the nations. He commanded them,

[B]e very strong to keep and to do all that is written in the Book of the Law of Moses, turning aside from it neither to the right hand nor to the left, that you may not mix with these nations remaining among you or make mention of the names of their gods or swear by them or serve them or bow down to them…” – Joshua 23:6-7 (ESV)

Unfortunately, this was not to be. In Joshua’s last address at the end of his life, he frankly instructed the Israelites that they would “not be able to serve the LORD” (24:19). And when they objected, once again, “He said, ‘Then put away the foreign gods that are among you, and incline your heart to the LORD, the God of Israel.’” (Joshua 24:23 ESV)

Despite their vigorous affirmations, they never ceased from their idolatry – for long. Even more, it only seemed to grow worse once Joshua passed from the scene. For example, when the period of the Judges arrived on the heels of Joshua’s death, a whole new era of lawlessness emerged. In fact, it was so rampant that the entire period is twice identified in Scripture as an era of anarchy. It is in this context that Judges 17:1-5 provides an account of how an illicit worship center was established. The explanation, given by the Bible, comes in the following verse: “In those days there was no king in Israel. Everyone did what was right in his own eyes.” (Joshua 17:6; 21:25) (To see evidence of Baal worship at Lachish down to the time of the kings of Judah, read Toilet at Holy Site Evidence of King Hezekiah’s War on Idolatry.)

So, it is little wonder that the archaeologists who were part of the Fourth Expedition to Lachish observed that the temple was essentially Canaanite. The spiritual idolatry of the Israelites from the period produced a material culture that at times was indistinguishable from that of the other nations. This reveals a troubling disconnect between identity and practice that will be familiar to readers of the Bible. Even more, it is a disconnect that is still detectable over three millennia later. The causes and consequences are explained in Scripture, and these are concerns about which we must KEEP THINKING!