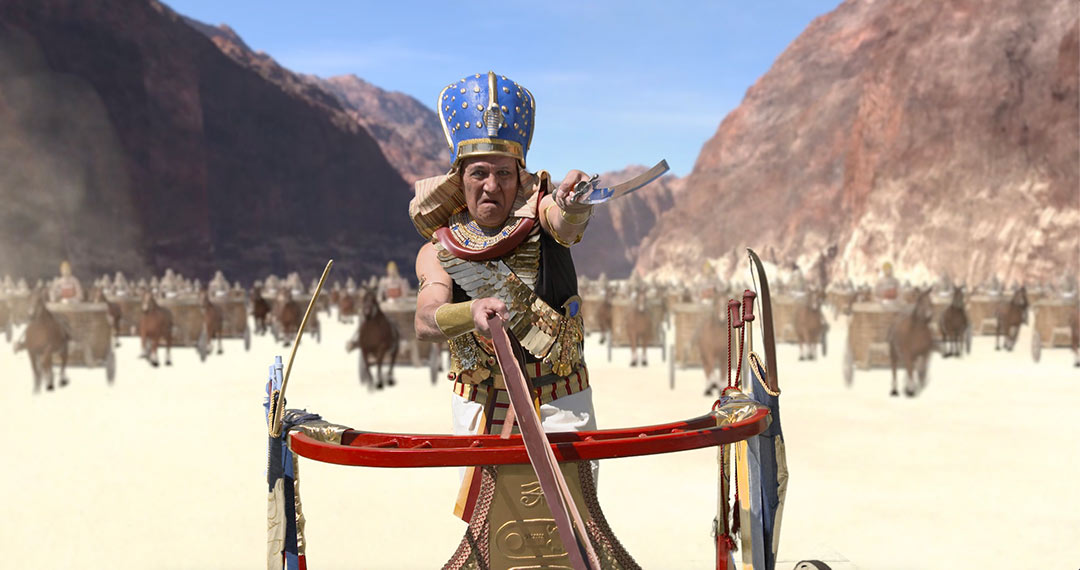 The Dead End of the Exodus Route

SUMMARY: The final installment in a series (with a Sneak Peek VIDEO) highlighting themes in the new film The Red Sea Miracle; delves into the Detour to a Dead End step of the biblical Exodus journey.

Then the LORD said to Moses, “Tell the people of Israel to turn back and encamp in front of Pi-hahiroth, between Migdol and the sea, in front of Baal-zephon; you shall encamp facing it, by the sea..” – Exodus 14:1-2 (ESV)

Where did Pharaoh Trap the Israelites?

We are just days away from the new film, Patterns of Evidence: The Red Sea Miracle, coming to over 800 theaters in the USA for a single night only on Tuesday, February 18th. One of the most dramatic steps of the Exodus journey investigated in the film is when Pharaoh and his army trap Moses and the Israelites at the shore of the sea. Where did this event take place and what implications does that location have for the nature of the miraculous parting of the sea that saved the Israelites from their impending doom?

As seen in past entries of this series of updates, there are two very different ways to view the events of Exodus in regard to scale and location. These two basic views are termed the “Egyptian approach” and the “Hebrew approach” in the film. The challenge for grappling with these two approaches is that each has a set of evidence and arguments to support their view, and believers in the veracity of the biblical Exodus account are found in both approaches.

The question remains, will either approach produce a pattern of evidence that fits the Bible well for all six of the steps? To determine that, the two views will need to be heard from and carefully listened to. The fourth step of the biblical sequence is the Detour to a Dead End. God commands the Israelites to turn off the way of the wilderness road – a Detour – and then camp at the sea.

Once they reach the sea they are at a Dead End with the sea before them and Pharaoh’s army coming in behind to trap them. How does the Egyptian approach understand these events? The sneak peek film clip below introduces a key clue.

A Potential Clue to the Exodus Route on an Egyptian Wall

One of the major clues in the Egyptian approach to the Dead End step is found in a relief carved on an exterior wall of Karnak temple in Luxor, Egypt. This wall is filled with a panorama of war scenes celebrating the victories of Pharaoh Seti I, who was the father of Ramesses II. One scene depicts Seti returning victorious to Egypt as he processes through a series of known military forts near the coast of the Mediterranean Sea.

The name of one of the forts on this scene (located just behind the horses’ back feet in the image below) is the Migdol of Seti I. The word “migdol” means tower or fort. Significantly, Migdol is also seen in Exodus 14:2 (see above) as one of the places in proximity to the Dead End campsite beside the sea. Could the Bible’s Migdol be the same as the Migdol of Seti I? Many in the Egyptian approach believe so.

Egyptologist James Hoffmeier commented, “A colleague, Dr. Ellen Morris of Columbia University, she wrote a 900-page dissertation on these forts, their functions, their locations, etcetera. And she concluded that there was likely only one fort named Migdol located in the northern part of Sinai in the New Kingdom. It’s not like there were Migdols all over the place.”

A Convergence of Exodus Place-Names

The mention of Migdol combines with another reality to draw attention to this area. There was a reedy marsh area in the northeast part of the Nile delta known as pa-tufy, meaning “the place of reeds” in Egyptian. Many in the Egyptian approach believe pa-tufy is the sea crossed in the Exodus. They make this connection by noting that the popular definition for the Hebrew name of the Exodus sea (Yam Suph) is “Sea of Reeds.” Other Egyptian and foreign words with potential connections to the names found in the biblical account of Exodus are also found in this same area.

A closeup of the Seti Relief shows a canal or waterway near a fort that is filled with crocodiles. Along the shore are reeds, typical of the lakes along the edge of the Nile delta that formed the northeast border of ancient Egypt. In the understanding of the Egyptian approach, these marsh-lakes contributed to the entrapment of the Israelites at the Dead End.

These connections help highlight the tendency of those using the Egyptian approach to focus on the place-names (or toponyms) in the biblical account and to link them to Egyptian definitions and locations. The natural result is that the events of the Exodus journey are pulled close to Egypt.

A Challenge to the Northern Border Lakes

The name of the body of water favored by Professor Hoffmeier for the Dead End of the Exodus is Ballah Lake. It was a system of shallow basins that were formed as backwaters of a Nile River branch.

This popular Ballah Lake proposal, however, does have some challenges. For instance, the location of Ballah Lake about 35 miles northeast of the Departure Point of Rameses/Avaris does cause a problem when looking at the biblical text. The Bible says the Israelites did not go on the northern route along the coast that passed right by Ballah Lake.

When Pharaoh let the people go, God did not lead them by way of the land of the Philistines, although that was near. For God said, “Lest the people change their minds when they see war and return to Egypt.” – Exodus 13:17 (ESV)

Then there is the question of the miracle at the sea. Is the Bible really portraying the parting of the sea as happening through a shallow marshy lake?

Jason DeRouchie, who is Professor of Old Testament at Midwestern Baptist Seminary stated, “The most natural context for us to understand the meaning of words is first in Hebrew. And what’s significant, I think, is that the Bible is given to us in Hebrew by Hebrews, telling us the story of God’s delivering of them. And so, it seems very natural to me that we would take this ancient book at face value and allow the Hebrews to tell us what they experienced – point by point, location by location.”

How can claims from these two very different main approaches to the Exodus be assessed fairly – and can a patterns approach be part of the solution? We look forward to seeing you in theaters as we unpack an inspiring and thought-provoking exploration of one of the greatest events in the Bible. Until then, KEEP THINKING!

TOP PHOTO: Pharaoh and the Egyptian army trapping the Israelites at the sea. (© 2020 Patterns of Evidence, LLC.)