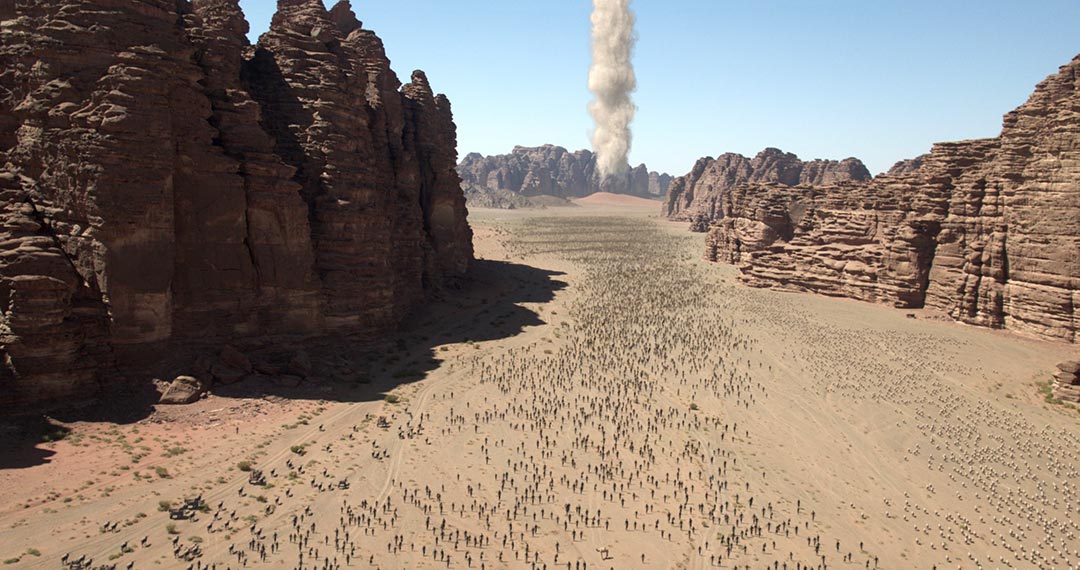 Which Desert was Crossed in the Exodus?

SUMMARY: There is a great debate about the scale of the Exodus journey. This entry (with a Sneak Peek VIDEO) in a series building toward the release of the new film, examines the question of which desert was crossed on the way to the miraculous sea crossing.

but when they came up from Egypt, Israel went through the wilderness to the Red Sea and came to Kadesh. – Judges 11:16 (ESV)

The Overlooked Step of the Exodus Journey

There is an important question that is often overlooked or downplayed in the search for the route that Moses and the Israelites took out of Egypt in the Exodus. Which desert was crossed before the Israelites reached the sea? Answering this question provides a key to knowing what sea was actually miraculously parted.

As covered in recent Thinker Updates, we are building up to the new film, Patterns of Evidence: The Red Sea Miracle to be released on Feb. 18, 2020 for a single night only. The Desert step is one of the six steps in a new biblical sequence that filmmaker Timothy Mahoney will be exploring as he searches for the location and nature of the miraculous Red Sea parting.

The Desert Before the Sea

It should be noted that the name of this step, “Desert,” is actually a bit inexact. The Hebrew term for the land the Israelites passed through is “midbar,” which can mean desert, but also includes wilderness areas of all kinds, such as mountainous terrain and even empty grazing land. The main idea is that it is an area generally empty of human settlement and developed support.

So “wilderness” would be a more fitting description, but since the biblical account makes it clear that at least portions of the Exodus journey were through dry desert and the other five steps of the sequence all start with the letter D, “Desert” was chosen for this step to make it easier to remember.

Most people are aware that the Israelites spent 40 years in the wilderness after leaving Egypt and before entering the Promised Land. However, the Bible makes it clear that a desert (wilderness) was encountered by the Israelites before the sea crossing. When they left Egypt, they were said to have taken the way of the wilderness to the sea (Ex. 13:18). Then, after taking a turn off that road, Pharaoh believes they are lost and trapped in the wilderness.

For Pharaoh will say of the people of Israel, ‘They are wandering in the land; the wilderness has shut them in.’ – Exodus 14:3 (ESV)

One important consideration is that this is not just an arbitrary issue of maybe the sea was crossed here, or maybe it happened there. Besides understanding the historical accuracy of the biblical text, what desert was crossed effects what body of water was crossed. And where the crossing happened determines whether the miracle involved was relatively small or spectacularly large. The question is, where was this desert?

Two Views of the Desert Step

Among those who accept the reality of a biblical exodus out of Egypt, two very different viewpoints dominate the debate. Timothy Mahoney refers to one view as the “Egyptian approach,” which emphasizes Egyptian connections to places in the account and sees the events of the Exodus happening on a small scale. This includes the size of the desert crossed before reaching the sea.

Mahoney calls the other view the “Hebrew approach,” because it stresses Hebrew meanings of the words in the account and the Bible’s description of geography and events. It tends to see the events of the Exodus happening on a much larger scale, including the size of the desert.

Those using the Egyptian approach propose a sea crossing at one of the lakes along the border of Egypt and at the edge of the Nile delta. Because of this, the desert for them is the small, flat sandy area just to the west of those lakes, shaded in orange in the map below. The distance across this desert is about 12 miles.

The Hebrew approach favors the Red Sea’s Gulf of Aqaba as the sea that was crossed. So for them the desert before the sea was the Sinai Peninsula (in blue in the map below). There is no evidence that this peninsula was called “Sinai” before about 2,000 years after the Exodus event. The wide disparity between these two approaches can be seen in that the Sinai is 150 miles across at the north end of the two gulfs.

Biblical Clues for the Desert Step

Two primary factors that determine the size of the desert involved are the speed (or rate) the Israelites traveled, and how many days they took to get to the crossing site. The Bible does not state how many days it took to get to the sea, but some in the Egyptian approach propose that it was three days. This is because three campsites are listed for the Israelites between their departure point in Egypt, and the miraculous parting of the Red Sea.

Not only are three camps mentioned in Exodus, but in chapter 33 of the Book of Numbers, Moses is commanded by God to make a list of the camps involved in the Exodus journey. Here too, the camps of Succoth, Etham and a third camp at the shore of the sea are listed. So, the thinking is that three camps equal three days.

Three days of travel would severely limit the options for which sea could be reached in that amount of time. However, those in the Hebrew approach point out that the biblical narrative describes a pillar of cloud and fire leading them so they could travel day and night, so it must have been more than three days of travel involved to get to the sea. But was there enough time to get all the way to the Gulf of Aqaba?

The other major factor is how much distance the Israelites could have covered each day. Archaeologist Bryant Wood takes the Egyptian approach and notes the following. “The Israelites left with all their possessions, with their families, the elderly, children and their animals – their flocks and their herds. They must have water and they must have food. And so, you have to, as you’re going along, provide for your animals. And this slowed them down.

“And if you look at records of nomadic peoples that travel around with animals, a realistic distance of travel would be about six miles a day, 10 kilometers a day. That would be about all you could cover.”

Environmental geographer Glen Fritz takes the Hebrew approach and argues for greater speed. “20 or 25 miles a day moving quickly, traveling day and night … that would be probably a good figure. These people were fit, they were slaves they were used to working seven days a week.”

How fast could the Israelites have travelled and how many days was it to the sea? What about the need for water? Did God’s supernatural care impact these considerations? These and other questions are addressed in the Desert step of the investigation.

The size and location of the desert crossed before sea is a key point in the search for the Red Sea miracle. There are actually numerous clues in the Bible that impact this issue. How one answers the questions above helps determine not only where they place the crossing site, but what kind of miracle that would have required. Stay tuned for next week when one more aspect of this investigation will be explored. In the meantime, KEEP THINKING!

TOP PHOTO: The Israelites following the pillar of cloud through the-desert. (© 2020 Patterns of Evidence, LLC.)