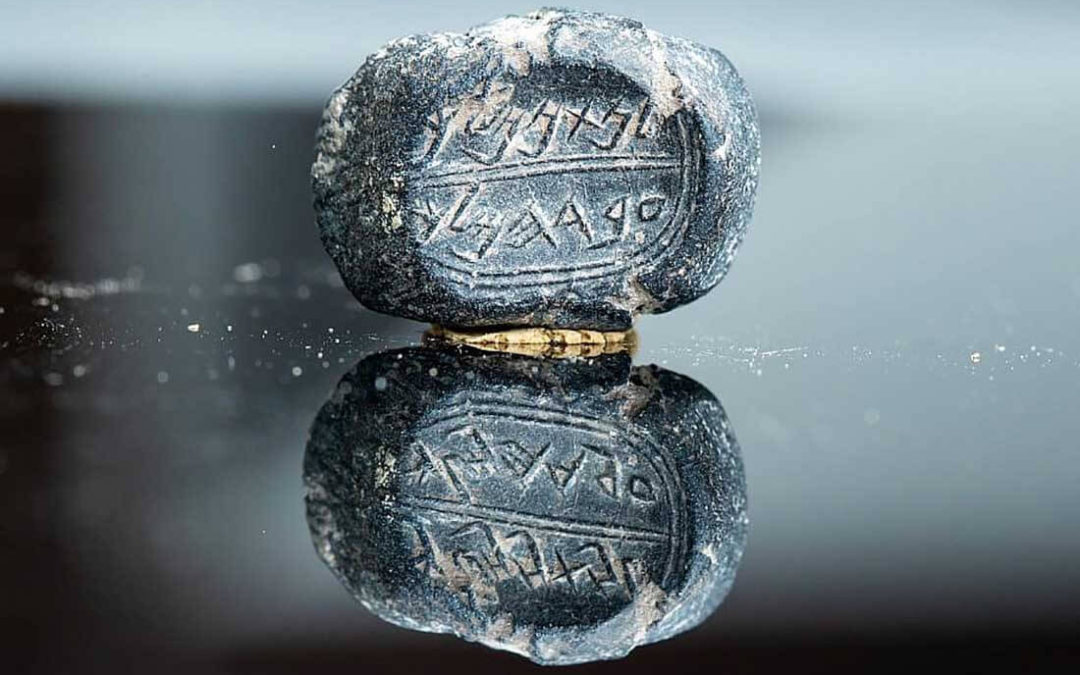 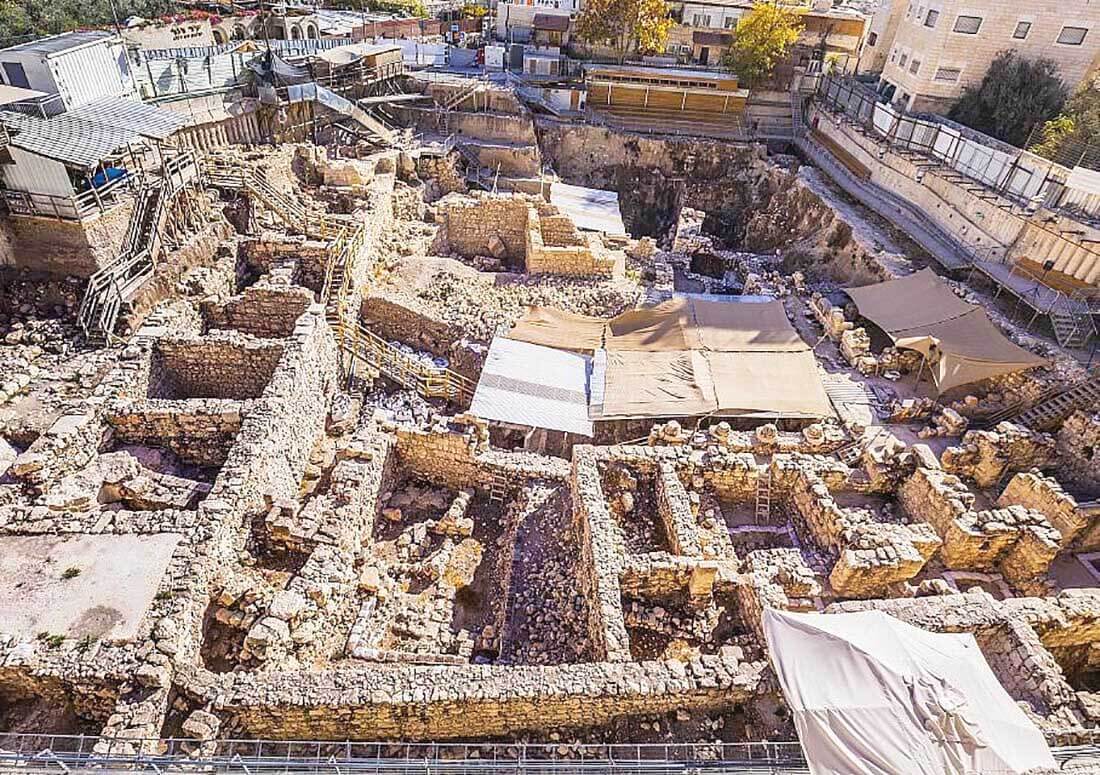 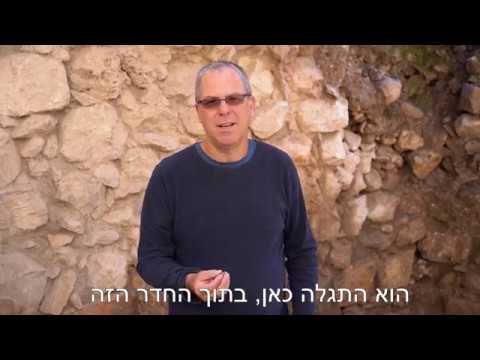 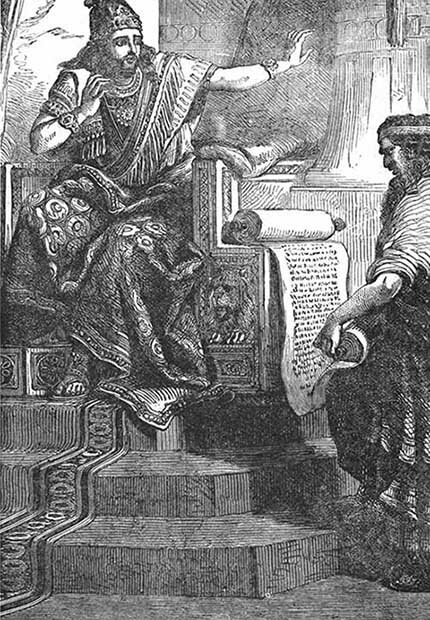 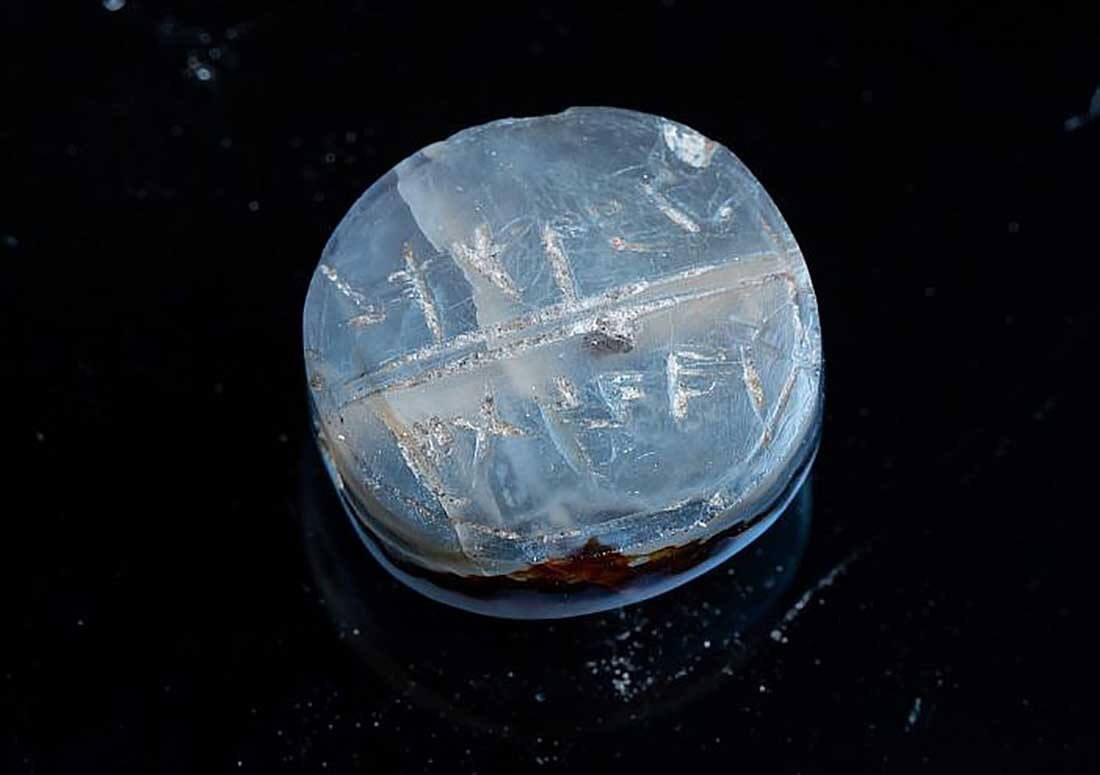 SYNOPSIS: A 2,600-year-old stamp-seal was found in context in the City of David, Jerusalem. The Hebrew inscription discovered on the seal names “Nathan-melech” an official under King Josiah who is mentioned in the Bible. It is the first evidence of this biblical person and the latest in a string of important seal discoveries from Jerusalem that name biblical figures and point to a vibrant monarchy operating in the Kingdom of Judah near the close of its history.

And he [King Josiah] removed the horses that the kings of Judah had dedicated to the sun, at the entrance to the house of the LORD, by the chamber of Nathan-melech the chamberlain, which was in the precincts. And he burned the chariots of the sun with fire. – 2 Kings 23:11(ESV)

A Tiny Inscription From Jerusalem in Ancient Hebrew

A rare discovery of a tiny seal impression (or bulla) bearing a one-centimeter inscription in Old Hebrew (or paleo-Hebrew) writing from the 7th century BC was announced by Israeli archaeologists last week. The inscription bears the name and title of Nathan-Melech, a government official under King Josiah, one of the last kings of Judah. Nathan-Melech is mentioned in the Bible’s book of 2 Kings (see verse above).

The seal impression was found on the floor of what was a large building of magnificent cut-stone masonry from the First Temple Period thought to have been an administrative building. It was one of two finds reported by the Times of Israel that were made within weeks of each other in the City of David’s Givati Parking Lot excavation by team members Ayyala Rodan and Sveta Pnik. The area is part of the City of David National Park in Jerusalem where King David set up his capital 3,000 years ago. The finds were also announced at the City of David website.

In the ancient world, seals were worn around the neck or on rings and used to stamp a small emblem onto clay or other soft materials – commonly to sign and secure scrolls or rolled up papyri that had cords wrapped around them. The seal identified the authority of the person responsible for sending the document and guarded against elicit tampering. A bulla is the piece of clay left over after the document has decayed away over the centuries.

The approximately half-inch wide bulla recently pulled from a burned layer of earth bears the words “(belonging) to Nathan-Melech, Servant of the King” (LeNathan-Melech Eved Hamelek).

Dr. Anat Mendel-Geberovich of the Hebrew University of Jerusalem deciphered the bulla and dated it to the mid-7th century (600s) BC based on the type of script used. She noted that because the seal only mentions his first name, Nathan-Melech must have been well known in ancient Judah. There was no need to mention his family name.

“The one million-dollar question is am I holding in my hand the bulla of the same Natan-Melech that was mentioned in the Bible? Well, I can never say that for certain but what I can say is that there is an overlap of three things: First the name Natan-Melech which is rare. Second, the period we’re talking about, the mid-7th century BCE – King Josiah– and third, the fact that we have the title. So Natan-Melech was someone who was close to the King,” said Mendel-Geberovich.

Video source: cityofdavid.orgThis find joins an impressive list of seals related to the ancient Israelites, and even people from the Bible, discovered in Jerusalem over the last few years. As reported in previous Thinker Updates, these seals include the names of King Hezekiah, the prophet Isaiah, and a prominent woman doing business in Jerusalem.

The Times of King Josiah

Josiah hearing the book of the law. (from Wikimedia Commons)

King Josiah reigned in Jerusalem from about 640-609 BC, within 23 years of the end of the southern kingdom of Judah when the Babylonians destroyed Jerusalem and the temple that Solomon had built.

After the wicked reigns of his father and grandfather, Josiah took the throne at age eight and soon began to purge Judah of its high places. The altars of the Baals and the Asherim and images of false gods were destroyed.

When 18, Josiah ordered repairs to the Temple and the Book of the Law given through Moses was discovered after long being absent from Judah’s religious life.

And when the king [Josiah] heard the words of the Law, he tore his clothes.

And the king went up to the house of the LORD, with all the men of Judah and the inhabitants of Jerusalem and the priests and the Levites, all the people both great and small. And he read in their hearing all the words of the Book of the Covenant that had been found in the house of the LORD.

And the king stood in his place and made a covenant before the LORD, to walk after the LORD and to keep his commandments and his testimonies and his statutes, with all his heart and all his soul, to perform the words of the covenant that were written in this book. – 2 Chronicles 34:19,30-31(ESV)

Nathan-melech was an official mentioned after further religious reforms were enacted by Josiah after reading the Book of the Law.

Second Hebrew Inscription Discovered in the City of David

Archaeologists have also discovered an actual stamp-seal made from a bluish agate stone from the same period engraved with the name “Ikar, Son of Matanyahu” (LeIkkar Ben Matanyahu).

“The name Matanyahu appears both in the Bible and on additional stamps and bullae already unearthed. However, this is the first reference to the name ‘Ikar,’ which was unknown until today,” said Mendel-Geberovich.

She believes the seal belonged to a private individual, but who this person was is unclear.

The large public building where the artifacts were found shows clear signs that it was destroyed by an immense fire early in the sixth century BC. This matches the biblical account of the Babylonians destroying Jerusalem in 586 BC.

The inscriptions are “not just another discovery,” said archaeologist Dr. Yiftah Shalev of the Israel Antiquities Authority. Rather, they “paint a much larger picture of the era in Jerusalem.”

“What is important is not just that they were found in Jerusalem, but inside their true archaeological context,” Shalev told The Times of Israel. Artifacts found in dumps or unknown contexts (such on the antiquities market) cannot be dated securely. Those found in place in the layer they were originally covered in are said to be “in situ,” which connects them to other finds and the era they are found in – in this case, a large, two-story First Temple structure that dig archaeologists believe was an administrative center.

“It is not a coincidence that the seal and the seal impression are found here,” said Shalev.

The Bible and Literacy as Foundations of the West

Prof. Yuval Gadot of Tel Aviv University and Dr. Shalev say the discoveries indicate the Kingdom of Judah’s advanced administrative system – something that counters the claims of some of the more skeptical scholars who think there was very little literacy in ancient Judah. Many archaeologists even doubt that a king named David actually built a palace here. But finds are beginning to accumulate that challenge this skepticism.

“Since many of the well-known bullae and stamps have not come from organized archaeological excavations but rather from the antiquities market, the discovery of these two artifacts in a clear archaeological context that can be dated is very exciting. They join the bullae and stamps bearing names written in ancient Hebrew script, which were discovered in the various excavations that have been conducted in the City of David until today,” they said in a joint statement.

“These artifacts attest to the highly developed system of administration in the Kingdom of Judah and add considerable information to our understanding of the economic status of Jerusalem and its administrative system during the First Temple period, as well as personal information about the king’s closest officials and administrators who lived and worked in the city,” they added.

Signs of a highly developed monarchy in Judah that extensively used bureaucracy and writing are highlighted in a past Thinker Update on the discovery of messages written by numerous soldiers at a frontier post of Judah. Ancient Israel centered at Jerusalem was the cradle of Western civilization, spreading the alphabet and ideas that shaped the Mediterranean world and, especially through the Bible, would shape Medieval and modern Europe.

Doron Spielman, vice president of the City of David Foundation, which operates the City of David National Park, said, “This is an extremely exciting find for billions of people worldwide. The personal seal of Natan-Melech, a senior official in the government of Josiah, King of Judah, as described in the second book of Kings. The ongoing archaeological excavations at the City of David continue to prove that ancient Jerusalem is no longer just a matter of faith, but also a matter of fact.” – Keep thinking!